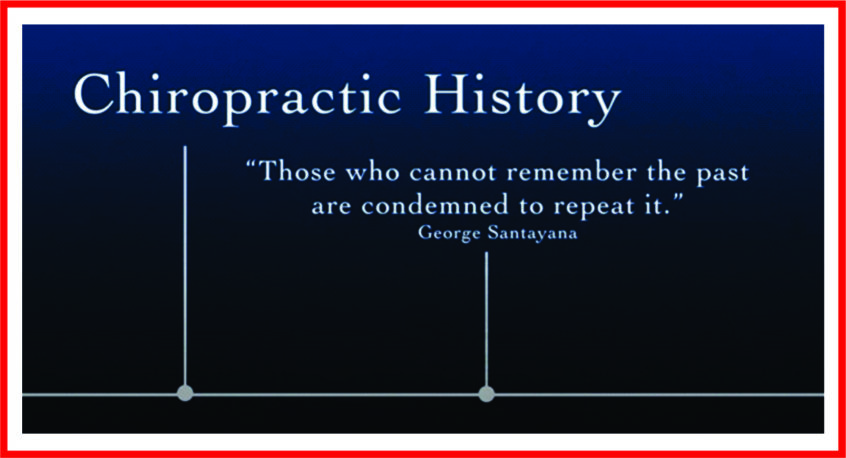 This post is a supplement to the workshop published on June 23, 2015 by Dr. Mike Bucknell and can be found on his YouTube channel at https://youtu.be/IILUfWUdpyw.  Due to the quantity of the information, it has been separated into two parts:

CHIROPRACTIC HISTORY: The AMA Agenda to Destroy Competition Part One: The Early Years (1847-1924)

In this workshop Dr. Bucknell covers the nauseating history filled with corruption that Chiropractic has survived. Organized Medicine has made every attempt over the last century to maintain its power grab. But there is hope looking back at what has made Chiropractic the largest “alternative” health profession in the world today.

Wisconsin and Connecticut pass the first basic science statutes.  This is where the â€œBasis of Educationâ€ comes in.  They now state that to practice, within three years and 6 months you must have the basic education: anatomy, physiology, chemistry, biology, etc.

The B.J. Palmer Research Clinic began 30 years of published study.  Two divisions were set up: Medical for diagnosis and Chiropractic for treatment.  The huge facility had two separate wings for these divisions.  Patients would come from around the world for treatment and care.

Mayo:       â€œWhy do you take x-rays and just adjust the spine and do nothing else and say the patient is healed?â€

Palmer:    â€œNo, sir, you are an ignorant man because you think you have it all figured out and you can heal everything.  We are at least smart enough to know that we canâ€™t heal everything!â€

The famous, but not well reported on â€œChiropractorâ€ Jack LaLanne opened the nationâ€™s first health and fitness club in Oakland, California.  He did not hold himself out there as a Chiropractor, because he would not have gotten the publicity he had, and he wouldnâ€™t have become famous.  His list of things to do for health: Exercise, nutrition, positive thinking, good habits, grooming, smiling, posture, helping others, relaxation, and faith â€“ and nothingâ€™s changed.  Today, these are the best tenets for good health.  Todayâ€™s gyms and health clubs â€“ innovated by a Chiropractor!

What is now the Council on Chiropractic Education (CCE) is established.

Palmerâ€™s skeletal collection grew to over 25,000 specimens and was valued at over $350,000 â€“ and thatâ€™s 1950s dollars (equivalent of Millions of dollars today)!.  He was also an avid collector of other things, such as ancient swords shown in the picture above.  He was also one of the worldâ€™s leading scholars on caves and traveled all over the world to every cave he could, and then lectured on the topic.  The bottom line is that B.J. Palmer was an avid thinker.

B.J. Palmer died at his winter home in Sarasota, FL at age 79 from colon cancer.  He is said to have acknowledged that the reason he felt he had colon cancer was that he had a stubborn curve in his lumbar spine that he could never get rid of from earlier on in life, and that led to the cancer.

The National Board of Chiropractic Examiners (NBCE) is founded.  They are still the governing board today.

Ensure that Medicare does NOT cover Chiropractic.  They failed at this, but not altogether, because although it is covered, itâ€™s only for adjustments – 25 of them per year – they wonâ€™t pay for exams and x-rays.  They will only pay for â€œmedically necessaryâ€ adjustments, but they wonâ€™t pay for exams or x-rays to prove medical necessity! There is hope that this could change if the Medicare Modernization Act ever passes.

Ensure the US Office of Education does not recognize or list a Chiropractic accrediting agency.  They failed on that one.

Encourage continued separation of the two primary national Chiropractic associations.  Theyâ€™re still holding ground on that one, because there is still fragmentation within the profession.

The National College of Chiropractic achieves federally recognized accreditation, gaining CCE (Council on Chiropractic Education) recognition from the US Office of Education.

US Congress authorizes payment for Medicare to Chiropractors.

â€œSore Throatâ€ releases secret AMA documents to the press, prompting â€œWilk vs AMAâ€ to be filed in 1976.  No one knows who â€œSore Throatâ€ was, just that he was an insider within the AMA who had access to documents.  Finally, someone had the guts to say, â€œThis isnâ€™t right!â€ He confiscated a box of documents and handed them over to the media through a Chiropractor.

The first Doctor of Physical Therapy (DPT) program is established at the University of Southern California.  This was an obvious attempt by the AMA to â€œcopyâ€ what Chiropractic was doing and call it their own, even though the two professions are nothing alike.  When did nutrition and exercise become something that the AMA encouraged?  Only in recent times, unlike Chiropractic which has always done so.  So, when they saw that they were not going to win the battle against Chiropractic, they began to do their best to just â€œabsorbâ€ it, to make it their own. The philosophy of Chiropractic is missing from the PT profession, that’s what will continue to separate them.

The US Agency for Health Care Policy & Research recommends â€œspinal manipulation therapyâ€ for low back pain.  So now the US government acknowledged that the number one prescribed treatment for low back pain should be what?  Adjustments!  Digital Motion X-ray (DMX) gains US FDA approval.  Thereâ€™s a whole other story on the money spent and the legal battles by the AMA to keep DMX suppressed because it would revolutionize our industry.

Life University has its accreditation temporarily removed. Why?  Because they wouldnâ€™t give up the philosophy of Chiropractic..again the major differentiator from PT.

Our battles over the next 20 years, I believe, will be as follows: