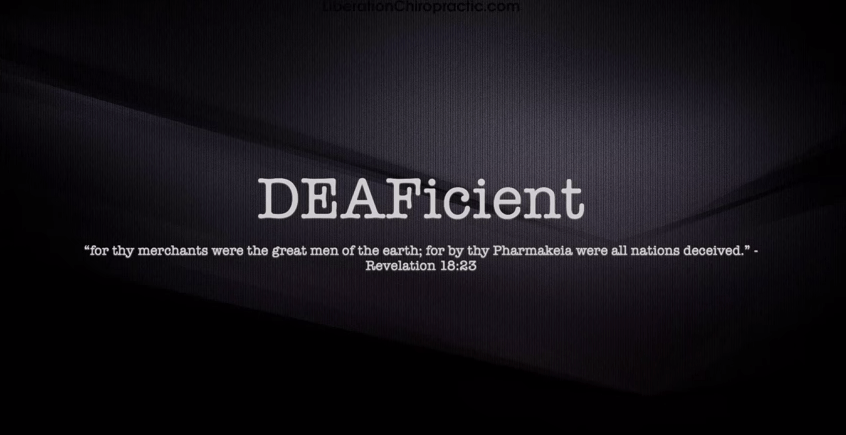 Within this three part blog post are the areas where many Americanâ€™s are deficient. This post is a supplement to the workshop from Liberation Chiropractic & Wellness in Mobile Alabama. Within we discuss historical backgrounds, big industry involvement, identification, and treatment protocols. To watch the complete workshop in itâ€™s entirety please visit DEAFicient: Iodine, Omega 3, Vitamin D3, and the catastrophic effects of their deficiency

Deficiencies are defined as a lack of something that is needed : the state of not having enough of something necessary.

â€œfor thy merchants were the great men of the earth; for by thy Pharmakeia were all nations deceived.â€ â€“ Revelation 18:23

You are deficient or are you DEAFicient?

This series is titled DEAFicient since many Americanâ€™s are not aware how the public has been systematically deprived of this information for monetary profits.

1811: Iodine discovered by Bernard Courtois during Napoleonâ€™s war.
1860: Dr. Jean Francois Condet announced that Iodine was the cure for goiters. This is ironically considered by some to be the birth of the modern medicine ie â€œdisease- cureâ€ model.
Early 1900’s: Pharmaceuticals raged in business gaining the upper hand on the nutritional and homeopathic industry.
1908: The US Government mandates chlorination of all public water supplies.
1924: The US Government mandates the iodizing of salt, squashing the massive and well established Iodine supplement industry. Science now proves the Iodine in salt is just barely enough to reduce visible goiters yet not enough to fulfill deficiencies.
1930’s: Mercury, known to damage Thyroid and endocrine function, in the form of Thimerosal starts itâ€™s use as a preservative in vaccinations.
1951: The US Public Health Service makes water Fluoridation official policy. Fluoridation is known to cause calcification of the Pineal gland, responsible for production of Melatonin (responsible for sleep, sexual maturation, and free radical protection)
Early 1950’s: The US recommended daily allowance for Iodine was dropped to .15mg after flawed â€œresearchâ€ begins to demonize Iodine. The Japanese consume approximately 12mg per day.
1970’s: Iodine is replaced in favor of Bromination as a dough conditioner. This practice was banned first in the UK in 1990 but still dominant in the US today.
1970’s: Some of the most Iodine rich foods are milk products…until subsidies began.

Used to make thyroid hormones after direction of the hypothalamus which is incredibly sensitive to toxins.
The main body surveillance mechanism for abnormal cells in the body (Cancer).
Triggers apoptosis (programmed death of cells) in normal and abnormal cells.
Detoxifies chemicals including Mercury, Chlorine, Fluoride, Bromine, etc as well as biological toxins such as food poisoning, snake venoms, etc.
Powerful antiseptic to bacteria, algae, fungi, viruses, and protozoa.
Anti-allergen.
Protection of double bonds in LIPIDS for delivery to cardiovascular system and synaptic membranes in brain and retina.
Iodine: The Result
Over 27 Million Americans have been diagnosed with a Thyroid condition and speculation is that over half are undiagnosed.
SHOCKING: Half of all women, and a quarter of all men die with evidence of an inflamed Thyroid. Studies show 1 in 2 Men and 1 in 3 Women develop Cancer in the US.

Has encouranged the recommeded daily allowance of iodine to be so low that your body will no longer fight off Chlorine, bromine, floride, and mercury. If in doubt introduce iodine to fight these chemicals that essentially can harm your body.

Iodine Patch Test: 2 inch by 2 inch patch of Iodine solution on forearm. If itâ€™s totally absorbed in under 8 hours there is a probable and likely deficiency.
Waking Temperature Test: Morning inactive temperature should be up to 1 degree less than midday temperature of about 98.6 degrees.
For 3 days take temperature immediately upon waking before getting out of bed, and again between 3-6PM. If greater than 1 degree difference then Iodine deficiency is likely.
Lab Tests: Various Thyroid and Iodine tests can be ordered if more intensive diagnosis is required, however they are
costly and usually are caused by the same problem.

Iodine â€œBromine Detoxâ€ Aid: 1-2 Teaspoons Sea Salt daily unless high blood pressure or taking Blood Pressure drugs. Also take Epsom Salt Baths daily until symptoms reside. Monitor blood pressure.
Systemic Formulaâ€™s IDS (Intracellular Detox System): Supplementary detoxification to speed clearance of bromines, heavy metals, and other toxins, rid the Hypothalamus of toxins and improve Thyroid function, and raise Glutathione levels to support Immune function.
FASCINATING FACT: Hoxseyâ€™s famous Cancer Elixir was in fact largely IODINE. He said himself his formula â€œwould not workâ€ without it. Though amount is not known for sure it is suggested as high as 600mg, and his Cancer centers flourished in 17 states until they were shut down by the Food and Drug Administration and forced to flee to Tijuana Mexico where they still successfully operate today.

DEAFicient
â€œThen the eyes of the blind shall be opened, and the ears of the deaf unstopped;â€ – Isaiah 35:5