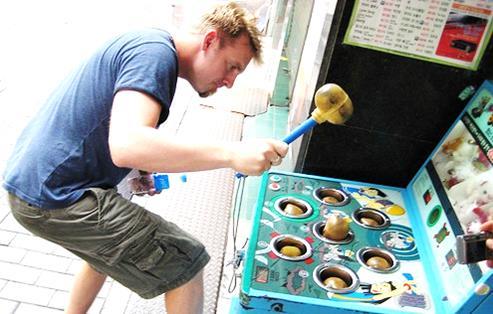 I wrote this article on Facebook probably a year ago or more. Â In a recent “discussion” regarding an undisclosed highly debated topicÂ on Facebook, I found myself in the midst once again of theÂ characters portrayed. Â So for your reading enjoyment and to now forever be searchable on my website….enjoy.

You know the game. Your objective is to smash the smiling moles back into their holes as they pop up. If you arenâ€™t fast enough, theyâ€™ve successfully evaded clobbering and you lose. The problem is the faster you clobber them the more ferociously they pop up. Does this sometimes feel like your experience on social media? When heated subjects come up you start whacking moles and can quickly become consumed and tired as you dash here and there hoping the game soon ends. Most moles play fairly. Most are friendly. Theyâ€™re just part of the game designed to make us sharper on our reflexes, and despite the effort itâ€™s supposed to be FUN where nobody gets hurt (hence the padded mallet). When the games over both you and the moles are still smiling.

This statement doesnâ€™t take sides, it doesnâ€™t push an underlying agenda, I just want to take a moment to categorize your typical moles as I see the game played. Thereâ€™s a chance even though no philosophical, scientific, religious, or other argument is being made on any one topic Iâ€™ll still make a number of people mad because they know theyâ€™re a mole. But Iâ€™m playing the game, so if youâ€™re a mole you will be wacked, thatâ€™s how the game works. PLEASE just donâ€™t read on if you are going to get offended by references or shorthands of naughty words.

The first social media mole is the â€œShould Ratâ€. They are the mole in the back corner, broken, that half pops up. When it twitches you whack it but nothing happens so you know itâ€™s broken and not part of the game. A Should Rat is anyone who partakes in scandalous activity for the sheer pleasure of starting s***. They ainâ€™t necessarily educated, they ainâ€™t necessarily proper, and they sho ainâ€™t worried about what all you think about em. The Should Rat is the generally indifferent individual who posts a debatable topic not out of moral or ethical conviction, but simply want to stir an argument they really donâ€™t even care that much about, and honestly wonâ€™t even read the comments. They just want to slip in, and slip out leaving their wake of Jerry Springer like distress everywhere they can. Theyâ€™re a â€œShouldâ€ Rat because they should stop posting about topics they know absolutely nothing about. Good thing about a â€œShould Ratâ€ is you donâ€™t have to argue with them because they already climbed greasily out the back window.

The second social media mole is the â€œBelly Up Bullyâ€. This is the mole that pops up repeatedly and every time you whack it, it pops right back up. You beat it and beat it, but the stupid thing just frustrates the hell out of you because it wonâ€™t stay down even when the game is officially OVER. The good thing about bullies is theyâ€™re typically unmistakable. While a normal human being will treat social media like a conversation in a bar with some degree of honesty and respect, you order a Bud Light and the Belly Up Bully punches you in the face and tells you how stupid you are for avoiding the extra calories because they sure as heck donâ€™t. For a bully it usually has nothing to do with opinion. Opinion doesnâ€™t matter. A bully doesnâ€™t want to be â€œcorrectâ€ they want to be â€œrightâ€. So if you disagree, youâ€™re an idiot, and you deserve to have your fingers removed so you canâ€™t type anymore. No actually, theyâ€™ll let you keep your fingers because if you can still type there is a chance they can find another way to punish you. So why â€œBelly Up Bullyâ€? Because these people would never say the things they say if you were in fact standing next to them in a bar. They know that without the separation of a keyboard they would in fact be the ones punched in the face. So they â€œBelly Upâ€ behind their devices, call people ridiculous names like dysfunctional children, come up with random and often completely stupid points that make the only important person in the room grin, then lurch back in like a rabid dog waiting for the next person to type something they wonâ€™t even read. This type of mole is just shameful, and like any bully itâ€™s best to just walk away.

The last group. Ohâ€¦the last group. They are what I refer to as â€œTextual Predatorsâ€. These are the machines that eat your quarters. Fitting name to say the least. The only thing that may make them look like a normal human being, or even a subhuman being is there Facebook profile. They may have a few family pictures, may have â€œfriends”, may post about college football, but inside they are evil incarnate. In a zombie apocalypse these arenâ€™t the zombies, these are the humans that let you in their home so they can eat you instead. No regard for humankind. No regard for the integrity of the individual. No regard even for common â€œfriendsâ€. With their slimy smiles on their well dressed profile pic they stay cordial only so long as you agree with them. But the minute they realize you donâ€™t think like they do, well then you simply deserve to die. Death sometimes isnâ€™t enough. â€œTextual Predatorsâ€ will molest you with attacks so mind boggling that while they think they are witty, everyone else stares at their phones phablets and desktops jaws gaping, drool beading up in a race against the tear building up at the unbelievable inhumanness of the statement. There is no rationalizing with them, no middle ground, itâ€™s either agree to their fondling or be punished severely. Does this disturb you? It should because there is a narrow space between what people have the false impression is acceptable on social media and what should be grounds for throwing their grimy asses in the back of a police car. The only answer for this filthy disgraceful behavior is deletion. If being social is outside the boundaries of your tiny little thorny heart then you deserve to be forever condemned from itâ€™s sphere.

Social media is â€œSOCIAL” in nature yet itâ€™s become something else. Itâ€™s being used today to build egos and tear apart communities. Iâ€™d argue the vast majority of arguments would never happen if they were face to face. By removing the threat of actual retaliation people let out their real selves, the people they are when they are alone. Integrity is who you are when nobody is around, nobody is watching. Based on what we see in the social sphere Iâ€™d hate to live with these people. Nonetheless you are my neighbor. So out of love, â€œShould Ratsâ€ please stick to meager subjects you can actually argue. â€œBelly Up Bulliesâ€ I love you too therefore I may not stop beating your head until you stop (out of love for the next person in line to play the game of course) but everyone has their limits so I likely will just walk away out of boredom. But â€œTextual Predatorsâ€, I can NOT let you get away for fear of those I love and care about. As a â€œTextual Predatorâ€ you have a thirst that is not understandable and not conscionable so if I donâ€™t get your attention who will. I will Protect Life from those who have no respect for it. For the rest of us, stay cordial. Act as if those you argue with are friends of friends you may end up meeting tomorrow. If presidential debates were like Facebook debates, nobody would get elected.